This is a guest post by Kathleen Gage of KathleenGage.com. 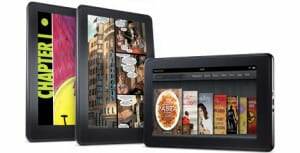 Note from Denise: Amazon has reported that they are selling 1 million Kindles per week. You have an unprecedented opportunity to get your content in front of millions of people in your target audience. Think you're not an author? Think again. You probably have ebooks and reports sitting on your hard drive that can easily be converted to the Kindle format and published in minutes. Check out the ebooks I offer to get an idea of the type of content you can sell for Kindle readers. At the end of this article by Kathleen Gage, there's an invitation to attend a free webinar on how to make your Kindle ebook a bestseller. You don't want to miss this!

Looking for a new way to get in front of potential book buyers? Try your hand at publishing a Kindle book. It's one of the easiest ways to get your material published…fast!
I couldn't believe how simple the process was from the very first attempt.
What's great is you don't need an ISBN to publish your Kindle version book. You can publish just about anything including:
The fact is, if you can write it you can publish in Kindle.

END_OF_DOCUMENT_TOKEN_TO_BE_REPLACED

On January 27th of 2011 the world of traditional publishing was turned completely and permanently upside down. While the inhabitants of the New York publishing houses wept, authors (and would-be authors) worldwide were dancing in the streets.

That was the day book and retail giant Amazon.com announced sales of Kindle ebooks had overtaken sales of paperback books. The Kindle format had already surpassed hardcover sales some six months earlier. And not only that, this latest sales milestone had come months earlier than Amazon CEO Jeff Bezos had expected.
So why were the traditional publishing houses so unhappy?
Well, if you have ever had the experience of trying to get a book published the old-fashioned way, you need no explanation. If not, then suffice it to say that the old, well-established publishing houses,  located almost exclusively in New York City, held the keys to the kingdom…
Including whether they would even consider accepting you and your book, the terms of the contract and the miserly amount of money they would pay to you for your trouble.
With the rise of the Amazon’s Kindle and to a lesser extent, Barnes and Noble’s Nook ebook reader platforms, those keys, once so tightly clutched in the palms of the insider few, have now passed to the hands of you, the author.
As an author, you now have almost complete control, plus the  opportunity to get your work in front of readers in a way that has never before been possible in the entire history of book publishing.

END_OF_DOCUMENT_TOKEN_TO_BE_REPLACED

In the last two weeks I've had the good fortune to interview two experts who have spilled the beans (and I mean they both are the definition of "over deliver") on how to use Amazon.com and BN.com (Barnes and Noble) to get visibility, credibilty and create passive streams of income.

If you missed the interview with Marnie Pehrson of IdeaMarketers.com, who took her book to bestseller status on Amazon in about 5 hours, you can get access to the audio replay here. She shared a lot of details that most people would not usually divulge in a free, no strings interview.

If you missed the high energy, content-packed webinar with Daniel Hall of Real Fast Book, on how to publish your content on BN.com's Nook eReader, you're in luck. He's making the webinar replay available for a few days. And he's not kidding. The replay disappears on Monday 6/20.

END_OF_DOCUMENT_TOKEN_TO_BE_REPLACED

You know how I love repurposing blog content? If you can leverage your blog posts, get them seen on two of the largest sites on the Web AND make money, that sounds pretty good, doesn't it? Well that's the expertise of my guest blogger, Daniel Hall . In this post he shares how a repurposed blog post became an Amazon Kindle bestseller! And, how you can learn to do it too on Amazon and Barnes and Noble's Nook! I've done this and have several ebooks for sale now on Kindle. Next up is getting them published on Nook. [Be sure to read the end of this post to find out details about a free webinar on how to publish on the Nook eReader.]

Your Blog Becomes A Bestseller?
By Daniel Hall

I have been blogging for about five years.  Not consistently.  Just anytime I had something to say or contribute or promote.  Often times – because I am all about getting the biggest bang for my buck – I will take my blog posts and re-purpose them.

That is, I will turn posts into articles and distribute them in the article directories.  I will also arrange to republish the piece as a guest post. Sometimes I will convert the post into a PowerPoint and make what is in effect a video article which is then posted on YouTube and other video portals.

So, as you can tell, I love re-purposing content.

END_OF_DOCUMENT_TOKEN_TO_BE_REPLACED

In conjunction with my recent interview with Marnie Pehrson, author and publisher of Trust Your Heart: Transform Your Ideas Into Income, I held a contest to give away several copies of the book. There were three ways to win:

And the winners are…