You are here: Home / Business Branding / Showing Up, Modeling, and Taking a Leap of Faith
114shares 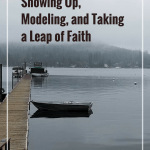 Life doesn’t always go as planned or expected. I’ve been running (actually “wogging”) since 2007. I’ve had my share of trips and aches and sprains, but never any serious injuries. The worst physical injury I’ve ever experienced was a torn ACL in my right knee in 2013 that happened as I was attempting to get out of a boat on Lago de Sandoval in the Peruvian Amazon. That was excruciating and set me back for months.

Two weeks ago I was near Bass Lake, just south of Yosemite National Park, three miles into a half marathon when I tripped and fell flat on my face. I knew I was going down and was cursing all the way. Thankfully several runners stopped, helped me, and called the sweeper truck to come get me.

Yosemite Falls; start of the race, the scene of the fall, and the aftermath.

A few hours later I was in the ER at a small hospital getting X-rays. The entire right side of my body was banged up good, but the brunt of my fall was taken by the fifth metacarpal of my right hand. A “boxer’s fracture” was revealed in the X-rays. I’m right-handed.

I was told to take some time off work. I laughed.

I’m self-employed. I’m a digital marketing consultant. I work on a computer all day. I’m right-handed. I know, I said that already. I don’t get paid sick days or vacation time.

And I wouldn’t have it any other way. I carry on. Because that’s what we entrepreneurs do, right?

When I got home I recorded this video. The transcript (edited for clarity) is below the video (8 min) if you prefer to read.

Greetings from Los Angeles, checking in to do my live video for the day. I am co-hosting a 10-day live video challenge with Lou Bortone and of course, I need to model what I teach and that is, doing a live video every day. Now we’re talking about Facebook Live and that’s why I’m here. We’ll also be talking about Instagram and Twitter live video, but for today I want to talk a little bit about something that’s come up for me in the last few days.

I’ve been faced with a challenge and the challenge is that I broke a bone in my right hand, which is my dominant hand. I broke a bone while I was running a half marathon up in the Sequoia National Forest near Yosemite and that has created an interesting situation for me. My left hand is very weak I’m finding out, and it’s hard to do a lot of things with only one hand that’s not your dominant hand. Now I talked about this a little bit on my personal profile the other day about adapting, and I’ve had to adapt a lot.

Two of the ways I’ve been adapting is in the form of my communication. I have been doing a lot more video when I’m responding to emails to my clients and colleagues. I’m doing them as video emails with a tool [Chrome extension] called Loom. The other thing I found that sometimes doing the video was not as fast as I would like it to be, so I started taking a look to find some free online voice to text software and I found a couple of Chrome extensions that I’ve been testing. [I ended up going with VoiceIn Voice Typing]

On the path to view Lower Yosemite Falls

I’ve had to figure out how they work and I am now doing some voice to text typing and that is also interesting. They’re not perfect by any stretch of the imagination. So if you get something from me, if you see a comment on Facebook, or get an email from me that is a little bit weird and doesn’t have a lot of punctuation or capitals letters, it’s probably because I’m doing voice to text since it’s easier than typing with my left hand, which is not easy.

I’ve had this tension because I typically try … when I’m doing a video, I want to look professional, I don’t want to have big sores on my face and swelling on my face from doing a face plant on a trail. I don’t want to necessarily be wearing a sweatshirt, but it’s the only thing that fits over this fiberglass cast that I have. So I’ve had to make some adjustments to how I show up.

When you see somebody show up online and on my video, for example, you may be unconsciously judging what they look like and that may not be really how they want to be presenting themselves and maybe they don’t have a choice. Now with live video, there are two things going on, or there is something going on there that it’s usually more spontaneous versus a planned out, scripted presentation. So there tends to be a more casual feeling about live video.

Not looking so good and not feeling so good, but I had to show up.

I was talking about this with a friend of mine and she’s said, “Yeah, well that’s all fine and good, but what if somebody doesn’t know you and they see you casual and then they don’t take you as seriously as a business professional?” and that’s a good point.

The thing about live video is that you can’t get more intimate with people in terms of who you are behind the scenes, that sort of thing, but you also have to be thoughtful about how you’re showing up. So while this isn’t normally how I would show up in a video, I’d probably be wearing a different blouse instead of a T-Shirt, but a T-Shirt is easier to get on. I wouldn’t be wearing a sweatshirt. I might be wearing a sweater if I’m feeling cool, but it’s not so easy with this.

So I have to take that leap of faith that you’re going to be okay with that, especially if somebody who’s never seen me before. This is where the content is really what’s the most important thing. Most people will forgive the visuals if your content provides some value. Of course, I am hoping I’m providing some value. I thought about this question quite a bit, because there are again, two sides to it. How are you showing up?

How are you showing up?

You need to be prepared for people making judgements about you, especially if they don’t if this is their first impression, so you watching this, this may be the first time that you ever see me and you’re saying, “Wow, she sure is pretty casual, maybe she’s not that serious about her business.” I’m not saying that you think that or anybody else thinks that, but someone might and we just don’t know it.

So my suggestion is that when you show up, and definitely showing up is an important thing to do to share your message with people. Showing up to serve people, showing up to have conversations with your audience, that’s all super important, but also give some thought to what the visual message they’re getting is too. Food for thought. I would love to hear your thoughts on this. What you think about how you show up, how you see others showing up, do you ever have some of that sort of feeling of judgment when you see somebody that may not look or sound as professional as you thought they were?

Food for thought. I would love to hear your thoughts on this. What do you think about how you show up, how you see others showing up. Do you ever have some of that feeling of judgment when you see somebody who may not look or sound as professional as you thought they were?

Do you cut them slack or do you just say, “Mm, nope, not happening”? I’d love to hear your thoughts about that.

I would love it if you post in the comments below… your thoughts and ideas about how you show up, how you think about other people and the way they show up. Let’s have a conversation about that. Okay? Comments welcome and I will reply.

I’m going to jump off now because I’ve got a class to teach in a little while. Take care. Have an adventurous day, and now I’ve got to figure out with my left hand … I’m using a right-hand mouse with my left hand. Very interesting.