You've got a great idea for a new project (product, service, website, book, etc.). You've tested your idea and you know there's a market or audience.

Now, how do you build it out so you get maximum visibility before, during and after the launch?

This week, I launched a new project with Ellen Britt…The Future of Ink: Digital Publishing for Online Entrepreneurs.

In a nutshell, here are the steps we took to build visibility and anticipation for our project. 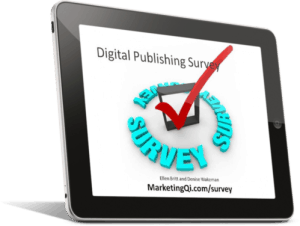 1. Created a survey on SurveyMonkey to gather information about our target audience and their burning questions about how to take advantage of digital publishing opportunities. The most important question was open-ended, asking about the number one question they wanted answered about digital publishing.

2. After closing the survey (promoted via email and social media to our networks for about 3 weeks), we analyzed the responses from over 1000 people. This was a fairly long process and involved reading nearly a thousand responses to the open-ended question and assigning each to one of ten broad categories.

3. Created a report of our findings. Since our long-term goal is to build credibility and authority in a new niche for both of us, this report needed to look good and provide useful information. The finished report met our goals: 2012 Digital Publishing Industry Report.

4. From the survey, we invited people to opt-in to a list to get advanced notice when the report was published. Over 50% of respondents did so.

5. The report needed to be delivered online so while we worked on the report, a site was being built on WordPress where we would offer the report as a free, no-optin download. Once the download page was complete, we sent emails to the early bird list as well as our own lists. Within two weeks, we had nearly 2000 downloads and the we promoted the report heavily on social networks. Many of our colleagues helped us get the word out. A press release also boosted our visibility tremendously. 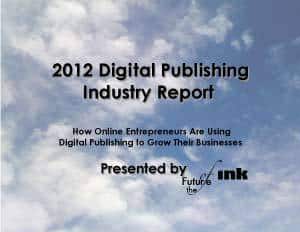 6. While the report was the first step to provide us with rich information and content, the site was intended to be the main event. The goal was to build the go-to site for online entrepreneurs to get information about how to integrate digital publishing – all forms of rich media – into their marketing mix. Essentially, the site is meant to be an online magazine and the prime focus of our project.

We intend for The Future of Ink to become THE authority site for online entrepreneurs who are looking for information about digital publishing. The primary focus is on digital ebooks, AND any and all forms of digital content publishing, including (but not limited to) videos, audio and interactive media.

7. On another track, we drew up a list of experts on digital publishing and invited them to be part of our core group of writers and part of the launch. Every one said "yes." We provided writing guidelines and due dates to receive their articles.

8. How do you launch a new site? We decided to host a free webinar, presenting the findings of our survey and answering one huge question most entrepreneurs have: can I really make money with digital publishing. At the end of the webinar, we would announce the new site which was populated with the first four articles.

How You Can Profit From Digital Publishing

9. We shifted our promotional efforts to the webinar. Event notices were posted on Facebook, LinkedIn and Google+. Ellen and I sent two email invitations to our lists as well as to the list of people who had signed up for early notification of the report. 876 people registered for the webinar and 260 attended live.

10. Once the site was live, we began promoting the individual articles by our first four writers. And that's where we stand today.

From the time Ellen contacted me about her idea to our launch on September 5, 2012, was about five months. And every step of the way we have carefully planned how to keep things buzzing about The Future of Ink. A twitter account is active and a Facebook page will be coming soon.

To create awareness and build visibility, you need a plan and patience to follow it.

The Future of Ink has been built from zero to an entity with 12 core writers, a list of nearly 600 people (so far) who are eager to know more, and a vision for growth over the next several years (more on that down the road). This is just the beginning and I hope you'll join us on the journey by visiting The Future of Ink and checking out the articles.

Got a project you want to launch with a splash? I know you can do it. Make a plan, tap into your network for contributions and assistance and stick to it, no matter how long it feels like it's taking. I admit, we could have moved a little faster on this project, and, both Ellen and I have our own businesses to run and clients to serve so The Future of Ink occasionally had to take a back seat. In fact, we pushed back the launch webinar date three times due to other priorities and schedule conflicts.

And, I'll tell you a secret. While both Ellen Britt and I have many years of experience with online marketing and creating massive online visibility, we wanted to create something big that will have a long life and serve a lot of online entrepreneurs. We decided we wanted to create the Social Media Examiner of Digital Publishing.

I was a member of the core "firestarters" for SME in 2009 and I know what it took and what Michael Stelzner has done to achieve the astounding success he has built in the last 3 years. So, we know we need to be committed to this for the long haul. [By the way, you can read about Stelzner's launch process in the book he published last year, Launch: How to Quickly Propel Your Business Beyond the Competition.]

As a business owner and entrepreneur, to do big things, you must be committed to doing everything possible to get your big idea off the ground. And when you do, people will notice and they will follow you and support you and want what you offer.

Get More Visibility on the Web

Join to get your free guide to attracting more clients plus news and tips about how to build a powerful presence on the web. No charge. No spam.

Get Your Free Tips