Is 2015 the Year of Better Visibility and more business opportunities for you? If so, please read on… (scroll down to get the book give-away info!)

No matter how much visibility you have now, it could be better, right? This is something I feel quite urgent about, especially when I talk to entrepreneurs who are struggling to get on the radar of more people they can serve. Usually they’re not sure what to do so they don’t do much of anything. If that describes how you feel, the truth is that if you don’t address your visibility needs sooner rather than later, it’s going to continue to be a long, tough, uphill slog.

But, it doesn’t have to be. END_OF_DOCUMENT_TOKEN_TO_BE_REPLACED

I've been a Seth Godin fan for many years and own all his books. I follow his blogs and buy just about anything he recommends. Why? Mostly because he is an innovator and a big thinker and I want to study and learn his strategy and tactics.

For 25 years Seth Godin has been exploring how to better make and promote books. Today, he moves his quest forward by a big leap as he introduces a crowdfunding project on Kickstarter to demonstrate a new way to publish and promote books. In less than three hours his "tribe" helped Godin more than double his goal to raise $40,000. That is the power of the tribe.

And yes, I am a backer of his project. The idea behind Kickstarter is that your fans support your project in exchange for early access to the product/service/art/book and for bonuses that may range from a digital download, a physical copy, a thank-you on a web page, a private meeting, etc., based on the amount of your pledge.

The buzz around this project on Twitter and Facebook continues to push the project forward. The bonuses are limited so if you want in, you have to act now.

What does this mean for authors who don't have a big fan base like Seth Godin?

Watch and study what Seth is doing. You can do it too. And, you need to be constantly building your online presence and visibility. As Seth says:

The best way for an author to use the internet is to slowly build a following. Difficult, time-consuming and effective.

If you have few followers, friends, fans and subscribers, it's going to be a tough road to publish and sell your book. It will be just as tough to fund a Kickstarter project. It's never too late to start though and now is better than later!

To learn more about Seth Godin's Kickstarter project, here are a couple of posts:

If you need help boosting your visibility on the web so you can build your fan base, let's talk.

What do you think of Seth Godin's Kickstarter project? Does this seem like a viable way for you to fund a project about which you're passionate?

This article was republished by SocialMediaToday!

The winners of the Poke the Box contest to win of of three copies of Seth Godin's new book have been announced and notified.  Their copies of Poke the Box are the way. Check out these winning women and see if you can help one of them start making their initiative come true. Thanks to 140+ people who submitted the projects they intend to start!

I am already getting better at sharing my message with my target audience in a way that is meaningful for them. So, become a world class copy writer, communicator, and get my message in front of more people directly would be and is now my goal – write and write more. ~Donna L. Ward, Business Coach

I think frequent blogging will help with this big goal! 🙂

I would write a book, create a dedicated website and blog about it and related topics, arrange a speaking tour, and also create a video and social media campaign surrounding the book and its topics. I would also explore some new media I haven’t had a chance to yet, such as podcasting, audio, and related info products. ~ Carrie Jaffe-Pickett

First step, identify your topic, then outline your ideas and start writing. If you're a blogger, take a look at the content you've already created and see how it can be adapted into chapters for the book.

If I could choose a method to get my art out to the world, I would create a video to show my unique techniques and how I express my own imagination through mixed media and collage art. Then I would advertise this video through social media, print advertising and target art organizations and galleries too. I would start classes in my home for beginning artists too. ~ Linda Harbin

Video has never been easier to produce. Get an inexpensive Flip HD video camera or Kodak Zi8 and start shooting. It doesn't have to be perfect or Hollywood studio quality in order to make an impact and get attention.

How would you advise these winners to "poke the box" and make their projects a reality? Leave your comments below.

Today I took myself out to lunch at my favorite Thai restaurant. I needed a break from my computer and took my Kindle because I just bought Seth Godin's new book, Poke the Box. While I savored my spicy noodles with chicken, I read about about 20% of the book (hard to know how many pages on a Kindle).

Godin's message is about being an initiator. About starting something. Ideas are a dime a dozen but those who actually start and initiate are few and far between.

When I finished my meal, I received a fortune cookie and laughed out loud… 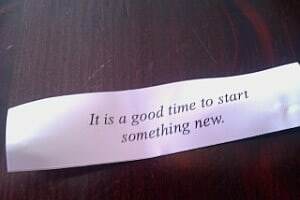 I bought 5 copies of Poke the Box to share with clients and I've decided to give away three of them now. Here's how you can enter to win a copy…

In the comments below answer this question (adapted from Seth Godin):

Imagine that the world had no middlemen, no publishers, no bosses, no HR folks, no one telling you what you couldn't do.

If you lived in that world, what would you do to get your business in front of more people, get more visibility, so you can touch more lives and make a big difference in the world?

Post your big idea in the comments and I will randomly choose 3 winners to receive a copy of Poke the Box, onFriday, March 11.

By declaring publicly what you will do, you are getting one step closer to making it happen. You may also attract the attention of someone who can help you or offer resources. And I really want to know what you're ready and willing to do to attract more business opportunities.

Go. Don't wait or think you won't win. You never know unless you take the risk and put yourself out there.

Get your Free eCourse with 7 Tips to Boost Your Visiblity on the Web – easy to implement right now!