You are here: Home / Online Visibility / Getting Noticed in a Noisy World
252shares 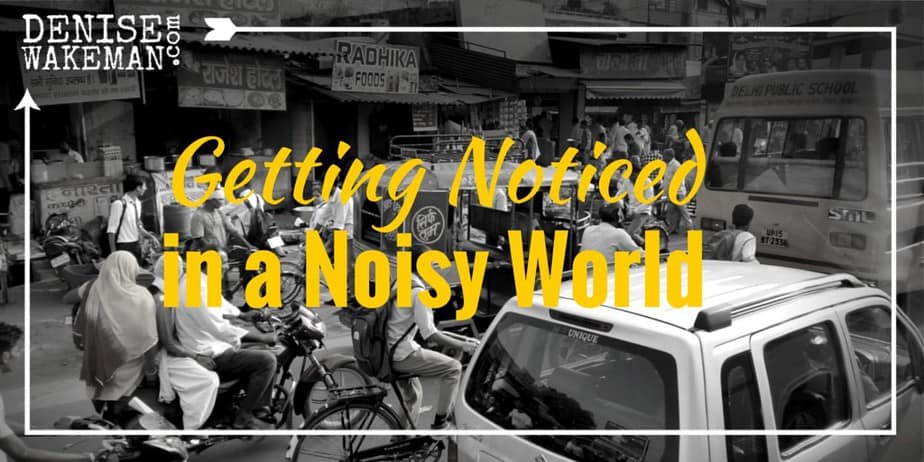 Here’s the rub. A lot of other smart, creative entrepreneurs are also promoting their wonderful products and causes. If you’re having trouble getting noticed, then it’s time to figure out how to get your “thing” more visible in a noisy world.

Where do you start?

My mentor coach, Andrea J. Lee, recently hired me to help her get the word out about her new book, We Need to Talk: Your Guide to Challenging Business Conversations. She had done a soft launch in the Fall to her Wealthy Thought Leader community. Now, it’s time to get it out to the world.

There are thousands of ways you can promote a book or product or service and I’m not going to go into them all in this post. There are hundreds of books to help you build a visibility campaign for your thing. I do want to share one of the tools we’re using to get the word out about We Need To Talk, since it’s one you may want to incorporate in your future visibility campaigns.

Collaboration is an important value in the WTL community so I suggested we use Thunderclap as one of the tools to get the word out on the book’s birth (launch) date.

Thunderclap acts like a social media flashmob… a single message is mass-shared at a specific time so it rises above the noise. Supporters can choose to share on Twitter, Facebook and Tumbler… one network, two or all three. Your supporters share a tweet or status update you have pre-written for them. On the scheduled date and time, it is posted on their chosen social networks.  Click here to see the campaign and add your thunderclap!

If you’ve ever tried to promote anything on the Web, you know you need help from your friends and colleagues. It’s the only way to extend the reach of your message beyond your own network. Setting up a Thunderclap gives you an attractive, fun way to gather your fans and followers and allow them to help and interact with you. They become invested in your campaign and its success.

A Thunderclap buzz campaign gives you the opportunity to create awareness and visibility for your launch.Click to Tweet

Yes, you must promote the campaign in order to attract enough supporters. You need a minimum of 100 people for Thunderclap to send out your message (for the free version). You can invest $45 or more, to guarantee your message goes out whether or not you meet your minimum. But, why wouldn’t you do everything you can to get at least 100 people involved in your campaign? The more people, the bigger your reach. I’ve seen campaigns with numbers in the millions.

Caveat: not to be a downer, but don’t get overly excited by the big numbers. Reach is simply the sum of all the followers of the people supporting your campaign based on their chosen networks. Reach doesn’t mean every single one of those people will see the message. It’s the potential, and you and I both know that every single Twitter follower does not see every single tweet you share.  The key word is “potential” including retweets on the day of the Thunderclap.

Set up your campaign between 14 and 60 days before your official launch day.

When you set up your Thunderclap campaign, you’ll need to have figured out a few things first in order to streamline the process. Do the prep work and create a document with the following information (some of which you’ll need for other promotion tactics so it’s good to have on hand in one doc):

Create an image to promote your campaign. Keep it simple so the message stands out when it’s viewed on a mobile device.

Once you complete all the required info and click the Submit button, you wait until your campaign is approve. For the free service, it could be a 3-day wait. If you upgrade, the wait time goes down to 24 hours. When I submitted the campaign for We Need to Talk, it was approved in about 10 minutes.

Then, you go to work promoting the Thunderclap. It’s more fun and more engaging for your community to participate in the building excitement around the launch. And, when you keep them updated as you get closer and closer to your goal of 100+ supporters, many will jump on board to share your progress with their followers as well, encouraging more activity and engagement.

For Andrea’s launch, we set up the Thunderclap 14 days out. The next steps are:

A couple of things to keep in mind…A Thunderclap campaign is just one tactic in a launch, no matter what it is you’re introducing to the world. Ideally it will work hand in hand with the other marketing tactics you’re implementing to make a splash on your big day.

It’s not something you set and forget. To be successful, you need to be committed to promoting the Thunderclap and connecting with supporters who step up to help you. The Thunderclap doesn’t require a lot of management, but as part of a bigger promotional campaign, you will need to keep your eye on it and sustain communication so it doesn’t fall through the cracks. It would be sad to miss your goal after going to all the trouble setting it up and inviting your fans to help you.

Have fun and good luck with your launches!

Need some guidance around creating a strategy to get your message out to a wider audience? Let’s talk! Click the image below to request an appointment.