You are here: Home / Business Blogging / Best TED Talks for (New) Bloggers to Get Motivated
346 shares 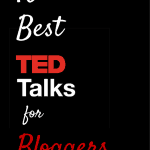 Running a blog can be a very rewarding experience. But it can also be a highly draining one, and everything from maintaining consistency to the cost prior to monetizing one can be enough to push bloggers into quitting. The worst part about this is that had they gone just a little while longer, they could have found real success doing something they love.

If you are finding yourself lagging in motivation, you might want to check out these ten best TED Talks by professionals and creative minds. They can really give you that boost of inspiration you need to keep working at what you are doing.

This is one of my all time personal favorite TED Talks. It is deceptively simple, and yet utilizes visuals in a way that generally these talks don’t. What they can teach bloggers is the importance of visual innovation in their efforts. Not everything has to be a stagnant post.

As a blogger, you have every capability to branch out into other mediums, and do something truly memorable. You already know that there are many options for you out there: infographics, podcasts, videos, Slideshares, streaming webinars, etc. This TED talk shows you the benefit of using something a little different to leave an impression.

Richard St. John found success. Then he lost it. His eight secrets about that success (and why he couldn’t hold onto it) comes down to one major point, and that was consistent quality. He was not consistent in his efforts, and in his quality, because once he made it he stopped trying.

Where he once pushed himself to be better, he stopped and started to lose it all. Which led to a crumbling of his entire life. He shows the importance of working to remain the best you can be, and always putting in the work needed to be amazing. Even when you have already made it in the big leagues.

This is a talk that is aimed at the technological field, and so you might not understand why it is on this list. But the general concept that it conveys is a good one to keep in mind: simplicity sells. You are trying to sell your blog to your readers. Having the most complicated posts won’t do it, because you are attempting to make a connection. Keep it simple, and that connection will occur much easier.

Mena Trott’s “How Blogs Are Building A Friendlier World”

The mother of the blogging revolution got up on stage to talk about the beginning world of this social engagement tool, and when she realized what it would mean to give the power of content sharing directly to the people online. Her argument isn’t just that it is a good way to share, but an excellent way to connect with people all over the world. Through blogging, she believes we can create a friendly, more understanding world across cultural boundaries. If she doesn’t inspire you, no one will.

Tavi Gevinson’s “Still Figuring It Out”

This is not a talk about anything to do with blogging. However, it is a talk by a very prominent teenage blogger about her passion for feminism, and changing the state of gender equality through a more measured view of women in the media. Her talk is a must see for bloggers, because you can clearly watch her expound on something she feels strongly about. This passion is directly injected into her blogging, which is what made her such a success.

Tobias Otting’s “We All Have A Voice”

Speaking of young TED presenters, Tobias Otting is only 9-years-old. He has a successful blog himself, and as he stands on that stage you can see why. He is eloquent, intelligent, and he connects with the audience immediately. He talks about how we all have a voice, and how important it is to develop it and be heard.

Have you ever read someone’s work, looked at your own, and thought, “Man, how can I compare to this creative genius?” It is something that happens to us all, and “Eat, Pray, Love” author Elizabeth Gilbert wants you to cut it out – because she believes we all have a creative genius inside of us!

David Kelley’s “How To Build Your Creative Confidence”

Telling an anecdote about a childhood friend, David Kelley begins his talk by pointing out how very fragile the creative ego can be. How often do we stunt our own confidence in creative endeavors? How often do we encourage one another? Learn how you can start to rebuild your confidence, and what that can do for you.

Amanda Palmer’s “The Art Of Asking”

Amanda Palmer is best known for her work with her band The Dresden Dolls. But both before and after, she has been an artist who relies entirely on her fans and other artists to help her and her bands make a name. A recent Kickstarter campaign that raised $1.2 million (on a $100,000 goal) shows the power of crowdsourcing. But it also shows the power and art of asking. [NOTE from Denise – Amanda Palmer just published a book based on the ideas she explores in this TED Talk, The Art of Asking: How I Learned to Stop Worrying and Let People Help]

Good ideas aren’t so automatic as you might think. Sometimes, they are concepts that are very slowly developed, or have to evolve over time. If you have ever lamented your lack of immediate genius ideas, this is the TED Talk for you.

TED Talks are a fantastic way to be inspired, and there are a lot of them out there. If you know of any you would like to share, whether about blogging or not, we would love to hear your suggestions. Post them in the comments!

Ann Smarty is the brand and community manager at Internet Marketing Ninjas, co-founder of ViralContentBuzz.com and founder of MyBlogU, the community that inspires bloggers by collaboration!